Typically, the “holiday season” is a slow time for my business. Most business people are focused on spending time with their families and are not yet thinking about their marketing or publicity plans for the New Year. I respect my clients’ need for time off and I appreciate having that time to myself to reflect on what the holidays really mean to me.

In previous years, I’ve felt a lot of pressure to produce gifts – not just the average gift, but really great gifts for my loved ones. That requires some time and ingenuity to shop for a specific gift with each person in mind. Fortunately, I gave up this practice a few years ago because I realized that it is much easier to ask people what they want and then get it for them. While there isn’t a “surprise factor” in the giving of the gift, there’s also no remorse or need for someone to return a gift that they didn’t really want or can’t use. By opening up the channels of communication with my family and friends, I have been able to save myself a lot of anxiety and stress and best of all, I don’t have to compete with the throngs of holiday shoppers in the parking garages or shopping malls across America.

So what do the holidays really mean to me? It comes down to a simple message: It’s about loving and appreciating the ones who are in my life – my family, friends, neighbors and clients. This is a great time to say “thank you.”

So thank you to all of my friends and business associates “out there” in the virtual world who are reading this. Thank you for sharing your expertise with me in your chosen fields and thank you for asking me to help you with mine!

I hope this next year is a good one for us all. I hope that we’ll be able to overcome any differences and be able to share a strong bond of support with our business objectives.

Be well, enjoy your life each day, and celebrate those who are in your life. I wish you a beautiful holiday and a prosperous 2017!

On Thursday, March 24, 2016, several of L.A.P.D.’s finest came to Sunland-Tujunga to address growing concerns about transient and drug crimes as well as drag racing and other issues. The event was sponsored by Sunland-Tujunga Neighborhood Council Safety Chairperson Nina Royal and was held at the Elks Club on Commerce Avenue. Guest speakers included: Commander Chamberlain, Homeless Coordinator for the City of L.A.: LAPD Lieutenant Solano, who oversees gangs and narcotics; LAPD Transportation Officer Flores and Captain Eskridge.

Commander Chamberlain opened the meeting by telling residents that a new law came into effect 2 or 3 years ago which prevents police from going through transient encampments and confiscating their belongings. However, there is now a proposed law before the Los Angeles City Council #56.11 which would allow police and sanitation to go through the possessions of homeless when they are left out in the open. Currently, a team known as the “Reset Team” goes to transient cleanup sites along with Department of Sanitation to identify bioenvironmental hazards that may exist in cleanup sites.

Commander Chamberlain mentioned that many homeless do not want short-term housing, that they are “service-resistant.” Due to a homeless advocate lawyer, who has created legal roadblocks for police, the homeless are well protected here in California. He pointed out that being homeless is not considered a crime. He added that it is in fact not humane to enable human beings to live in tents and he suggested that handouts of clothing to the homeless is actually creating a larger issue with trash accumulations.

Captain Eskridge spoke about the LAPD Transient Car that focuses specifically on transients committing crimes. In order to support police investigations, he suggested that businesses and residents install video cameras, so if a crime is committed, there is proof to prosecute them. He added that today’s technology is very inexpensive and can provide very good quality surveillance for properties.

Lieutenant Solano spoke about how his work involves reducing the number of violent crimes that go hand in hand with gangs and narcotics so he can rebuild the community’s trust. He gave a report on what is going on with the local gangs in the Sunland-Tujunga area and how crimes have been reduced. Out of 18 previous marijuana dispensaries in the Sunland-Tujunga Foothill area, only a few locations now operate.

LAPD Traffic Officer Flores of the Community Traffic Safety Unit then reviewed stats on the number of traffic incidents in the Valley last year: Out of 17,000 total, 1,600 were in Sunland-Tujunga and 5 involved fatalities. That number is now up to 13 fatalities for 2016.

Residents questioned how to deal with illegal street racing, a big issue for our community. Police are spread thin right now, but residents were told to report it to LAPD and they will respond as soon as possible. As with any police activity, it’s always best to report the incident to the police and let them investigate instead of trying to resolve it yourself.

Important phone numbers to call to report crimes: “911” – for emergencies only. 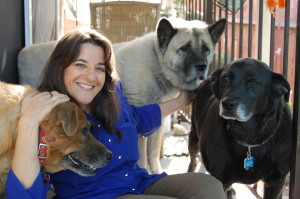 As I review my year, I wish I had more time to work with clients and more money to give to the non-profits I support. The Holiday season, for me, is about giving back. If you are interested in participating in my give-back efforts, please read how we can do this together.

I Want to Donate to the Charity of Your Choice!

As the year winds down, it’s a good time to review the way your communications materials are presenting you. Maybe there are changes to your services or to your staff. Perhaps you have a new offering that others don’t know about. At the very least, it’s helpful to create new messaging for the New Year to help brand your business. So during December, for every regularly – priced writing service you order (blogs, web content, ghostwriting, press releases, One Sheets, newsletters, etc.), I will gladly donate $25.00 to the charity of your choice. (If you don’t have a preference, I will likely donate to SPCLA or another animal rescue group that is fighting to survive).

End of the Year Special:

For those who have incomplete LinkedIn profiles or who aren’t sure how to use LinkedIn, I will improve your entire profile and give you a private tutorial to help you optimize how you use LinkedIn. Those who I’ve worked with say they feel more confident about using LinkedIn and as a result, post more, which ultimately results in more business. During December, I will provide this service for only $175.00 (normally $225.00).

This year, I built a new website that is easy to read and optimized for mobile devices. I’ve added about 200 new writing samples and other useful tabs to make it more interesting: www.writerpatkramer.com. If you like my website or have used my services, I would greatly appreciate you “liking” my Writer For Hire Facebook page or writing a Yelp review.

For now, I wish you the happiest of holidays ~