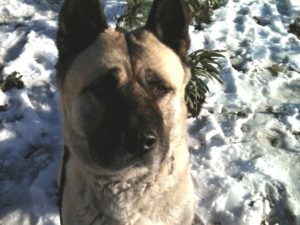 I have always been a “dog person” and sometimes my love for animals extends to helping them out of bad situations. Although I have a full house already, if I am able to help rescue a dog, I will do so. Sometimes this translates to donating money to worthwhile animal rescue   groups; other times it involves hands-on rescue work, such as with Niko, who I write this for to preserve his memory.

I Spot Niko in the Middle of a Busy Street

I first saw Niko when I was traveling down a busy street near my home on a Saturday morning in October 2010. He was limping across tne roadway during mid-morning traffic, tagging along behind two other loose dogs.  He appeared to be quite old and frazzled with his ribcage showing through his coat.

Initially, I wasn’t going to stop as I was on my way to meet some friends but my love for the Akita breed, with its loyalty and intelligence, made me decide to turn around and go back. When I got out of my car, he stepped forward to check me out, making full eye contact in a curious but non-aggressive way. He was awesome to behold with beautiful markings on his tan, black, and gray body with long legs, a large head and soulful eyes.

I held out my hand for him to sniff it and I asked him if he wanted to come with me. As soon as I opened my car door, he jumped right in followed by the two others who were with him. With them now safely in my car and off the street, I drove to my home and opened the gate to my front yard as I assessed the situation. All three were thin but Niko was in the worst shape. He seemed very neglected with a filthy, flea – infested coat and green ooze dripping from his eyes.

The female was a beautiful younger Akita who appeared to be in heat. That’s when I realized that both males were intact (unaltered) and it wasn’t long before a fight broke out in my front yard between the two. The other dog, a Yellow Lab, jumped on Niko’s back and grabbed him by the neck but Niko was too weak to fight back. So I jumped in and grabbed the Lab by his collar. When I did that, he swung his head around and bit down hard on my wrist causing blood to start spurting.

Fortunately, a neighbor was walking by and I yelled for her to help me. She ran into my garage and grabbed a rag which I tied around my wrist.  I then lured the “biter” out of my yard and locked the gate behind me. I drove myself to the nearest hospital where I needed several stitches to close the wound. Later, I reported the bite to Animal Services and they came and took the dog back to the shelter to impound him while they tried to locate his owner.

For the next three days, I fed and cared for the two Akitas who were very well behaved and friendly. I made up flyers to post and also posted them on social media. A few days later, having received no input from my flyers, I reluctantly brought the two to the Animal Services shelter to see if they could find the owner. I also put in a request to have Animal Services contact me after the waiting period was over so I could try to find them a home.

Within a few days, the owner of the two Akitas came for them and they were released to him. (Despite the older dog’s poor condition, I was told that the dogs were better off with their owner than at the shelter). When I called and was told the dogs had been released, I was very upset. Who would treat dogs this way and why would Animal Services let them go back to a home where they had been abused?

Fortunately, I was able to find out the name and phone number of the owner and I called him to ask if he needed help with his dogs. He told me that he had no money to feed them and was out of work. I said that I would help out by bringing him some dog food.

When I went to the owner’s home, I saw that he was keeping Niko in a locked outdoor enclosure, not much bigger than a cage where the dog was exposed to cold, rainy weather. The female was not on the premises. (He told me that he was using the dogs to “make babies” so he could sell them – aka: a backyard breeder). In this case, he never took the dog to a vet and had no plans to in the future, even though he was obviously very sick).  Also, I noticed a small food bowl in his cage but no water.  Depending on what the family was eating that day, that would be what Niko would get –  a very poor diet for a canine.

The pen in which he was kept was filthy and infested with bugs. Niko’s coat was also filthy and he smelled really bad. I knew I had to get this dog out of  these hellish conditions or I wouldn’t be able to sleep at night.

For   the next three weeks, I continued to keep in touch with “Oscar.” I offered to take the dog – he said no. I asked if he needed any food. He said no. I asked if I could bring the dog to the vet. A week or so after I made that offer, the man agreed, as long as I would   pay for it. That was one of the happiest days of my life!  The following day, November 8, 2010, I drove to his house and removed Niko from his kennel to take him to my vet.  As I sped away, I knew I would not be able to part with him if he survived.

Malnutrition Was the Diagnosis, photo below of what he looked like 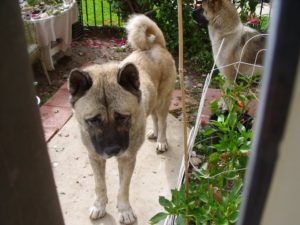 My vet diagnosed Niko as suffering from severe malnutrition with a bronchial infection. He was also anemic from the flea infestation.  While a healthy male Akita can weigh 120 – 130 lbs, this poor guy only weighed 90 lbs. at that time; you could place your finger in the space between his ribs.

When I spoke with “Oscar” again, I told him about the vet’s diagnosis and how much money it has cost (nearly $1000) for veterinary care. Since he had already been neutered, this dog had no value to him anymore.

Over the next few days, I received calls from his sister in law, who, again, tried to convinced me to give some money to Oscar – in addition to paying the vet bill.  I told her that my expenses more than paid for what I would have given him.

The following day, I got a call from Oscar’s neice who said I could have Niko. I asked for his papers and medical records and she agreed to give them to me. When I met her, I told her that I would make sure Niko was well cared for and loved. She asked if I would let her kids visit him in the future. I said that would be fine – however, I never heard from her again.

Now What Do I Do?

I hadn’t really planned on having a third dog – two was enough, but I had to help Niko out of this bad situation so I fixed a bed for him in the back of my car. It was cool in my garage and it sure was better than being in his filthy kennel. During the day, he had the run of my yard although I had to keep a watch on his when my other dogs were out as my other male – a Chow/Retriever mix, was trying to start fights with him whenever they were in the same room. Over the first few months, I had to break up a few fights and I got bit a few times – no big deal.  Eventually, I was able to teach the two males that they had to share the space inside my home and that everything was going to be okay.

The other issue I had was in teaching Niko to walk on a leash. I don’t think he had ever been walked before. After several injuries to my shoulder and knee, I took him to a pet trainer and got him some behavior modification, which he did very well with. He was a quick learner and had a good attitude.

Over the first year or two, things settled down. He began sleeping on my bed and the problems with my other male subsided as they learned to respect one another’s space. This was good because I liked to take all three of my dogs out in the car when I ran errands and they loved the outings. Niko would stick his whole big head out of the window and sniff the air. That always got a lot of smiles from the people we passed in my car. Everyone loved Niko – some even thought he was a polar bear! Niko lived to be almost 15 years old, which is amazing for an Akita. He was an excellent watchdog , always waiting in my front yard for me to return home. He patrolled the yard and kept my home safe. No one dared to trespass into my yard! In addition to being an excellent crime deterrent, he was compassionate, loving, and caring and let me know every day that he appreciated the home I gave him. He frequently looked me in the eyes and gave me his paw and a big wet kiss.

Losing Niko was inevitable. He was having trouble walking and this affected his ability to get outside when he needed to pee and poop. For me, that was something that I was willing to put up with – not a reason to put him down. I just got doggie diapers for him and he seemed fine with wearing them when he was in the house.

Finally the day came when he had a medical emergency and I knew it was the end. Making that decision was very hard but I knew I didn’t want Niko to be in pain any longer. I also knew it would be one of the greatest losses in my life, and it is.

Losing a friend, someone who depends on you, someone who loves you more than life itself leaves an imprint that can’t be easily erased. You have to grieve that loss and that’s what I am doing as I write this. Niko passed just a few days ago on September 10, 2018 and my home feels empty without him, even with my other two 13-year olds, Mojo and Lily (and Aggie, my roommate’s 3 year old). But I have no regrets. It was all worth it for the love I had from that beautiful dog I named Niko. So if you ever see a stray in the road, don’t just drive by and hope that it doesn’t get hit by the next car. Pull over and help it if you can. That animal will love you unconditionally and your life may become more fulfilling as mine most definitely did.