On Tuesday, August 2nd from 6 p.m. – 9 p.m., officers from the Los Angeles Police Department will attend the annual National Night Out event at Little Landers Park, 10110 Commerce Ave. in Tujunga. National Night Out is an annual community-building campaign that promotes police-community partnerships and neighborhood camaraderie to make our neighborhoods safer, better places to live. Neighbors participate across thousands of communities from all 50 states, United States territories, Canadian cities, and military bases worldwide.

“The purpose of National Night Out,” says Nina Royal, Safety Chair of the Sunland-Tujunga Neighborhood Council, “is to enhance the relationship between neighbors and law enforcement while bringing back a true sense of community. Furthermore, it provides an opportunity to bring police and neighbors together.” 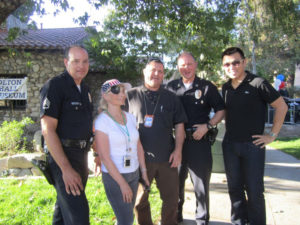 The event will include a variety of activities including face painting, an art contest in the street with chalk, and a contest with prizes for the kids regarding public safety. As always,  there will be live music and police cadets will be grilling hot dogs. This year, there will also be food donated from various restaurant in town.

(left) Nina Royal poses with LAPD officers at the 2011 National Night Out.

In celebration of NNO, Royal recommends that residents install blue lightbulbs i 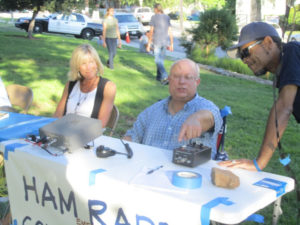 n their home lights to honor the police and to create awareness of this event. LAFD will also be taking part in this event as they play a major role in public safety, especially now with the fires.

“We usually bring out 300+ people to National Night Out and that’s not counting the different nonprofits involved in public safety that hand out information,” says Royal. “From 1989 – 1994, Sunland-Tujunga had the highest crime rate in the Foothill Division with crime-ridden neighborhoods, vacant and boarded up homes and businesses that drug dealers and transients had moved into. My husband, Bob, and I started a group called Sunland – Tujunga Involved Residents because we wanted to bring safety and public service to the community.

“By taking back Little Landers Park, which was then known as ‘Connection Park,’ and picketing City Hall downtown, we started getting traction,” she adds. “We also held a “Take Back Our Community” parade down Foothill Boulevard. In 1989, we held the first Town Hall meeting that I think this community ever had; North Valley City Hall was packed. After that, the LAPD started a program called PACE which had to do with cleaning up boarded up buildings and vacant houses followed by the street cleaning.

“We organized about 50 neighborhood watch meetings monthly throughout Sunland – Tujunga,” she says, noting that they decreased during the reign of former LAPD Chief Parks who disbanded the senior lead officers so neighborhood watches had nobody to report to. Since the senior leads were brought back, neighborhood watches have started up again and people have started taking a stake in their community. With local businesses pitching in and cleaning up the areas around their property, others have taken charge too. The result is that the S-T community now has one of the lowest crime rates in the Foothill Division.

As more people get involved and through educational efforts, community emergency response events and neighborhood watches, there is now a sense of pride, once lacking, in the Sunland –Tujunga community because people know they can and do make a difference in their own quality of life through their involvement.

Somewhere between 5,000 and 6,000 people staked out a viewing spot along Foothill Boulevard in Sunland on July 4th to witness one of the longest parades the community has seen. Temperatures in the 80s contributed to a very pleasant day for the 80-plus businesses, organizations, dignitaries and equestrians participating in the Independence Day parade hosted each year by the Sunland-Tujunga/Shadow Hills Rotary Club.

“LAPD Sgt. Ojeda ensured that we had great police coverage and a very safe parade,” she said. “Our grand marshal Brian Schneider was the celebrity of the day and he deserved it. We were thrilled to have Congressman Adam Schiff, Assemblywoman Patty Lopez, Los Angeles City Attorney Mike Feuer, and Kevin James, president of the

Los Angeles Board of Public Works, riding in the parade. It was a lot of fun and we really appreciate everyone coming out to celebrate this awesome day with us.”

The parade started promptly at 10 a.m. with a flyover by an LAPD helicopter and this year’s LAPD cadets carrying the ceremonial banner. A special LAPD Motorcycle Corps then impressed the crowd with its skilled maneuvers and flashing lights, providing the parade dignitaries with a thrilling escort.

The parade lasted two hours as each entry turned the corner from Summitrose onto Foothill Boulevard to begin the one-mile stretch. Among those riding in festively outfitted vehicles were entries from the Sunland-Tujunga Neighborhood Council, Little Landers Historical Society, the American Legion, the Boy Scouts and Girl

Many entities contributed to keeping the costs down for the Rotary, which amounted to about $1,500 for putting the parade into motion. The STNC paid for the Rotary’s rented golf carts, Burbank’s The Sign Studio provided free car signage, and many others donated their time and effort to help make this year’s parade a success.

As evening approached, the gates opened at Verdugo Hills High School, the site of the Family Fireworks Festival, put on by the Sunland-Tujunga Shadow Hills Community Fund and the S-T Chamber of Commerce.

Brenda Fortune, a community fund member and director of the Sunland-Tujunga Chamber of Commerce, spent months setting up the Family Fireworks Festival, which drew an estimated 2,100-2,300 people. Her role as coordinator involved bringing in the food trucks, signing up volunteers, getting donations from local businesses, making sure the power was “on” for the lighting and sound, getting the stage built, and then making sure Pyro Spectacular was ready to go when the lights went down.

“Everything went really smoothly,” said Fortune of her role with Community Fund President Dan McManus and S-T Chamber President Michael Moncreiff in putting the event together. “It was a mellow event and we made all of the money we expected to make to provide matching grants next year to Verdugo Hill High School clubs and organizations to pay for different projects. We were very pleased with the turnout.”

With tickets selling for $8 (children under a certain age got in free), the Family Fireworks Festival provides an affordable place each year for families to celebrate the holiday in a safe way. The cost of admission included games for the kids by community member Phillip Powell, and face painting by the Whittier Clowns. For the adults, music was provided by the bands Positive Source, Thunder Tap, Revolution Road, and Ceile Borman and Tropical Punch, with Borman singing the national anthem. Shane Coleman, of “Heroes of Life,” ran the soundboard to bring the entertainment and fireworks to life.

To cover the costs required for this event, several businesses stepped forward, including DIY (Do It Yourself Center) in Tujunga, which acted as a major sponsor, C&M Printing, Vons, Mark’s Lock and Key, Albertsons and Athens Services. Additionally, volunteers from the YMCA, STNC, and S-T Chamber, among other service organizations, helped with ticket sales, while VHHS girls’ softball coach Eddie Marquez and several other coaches provided gate security.

As the night set in, U.S. Congressman Adam Schiff and Assemblywoman Patty Lopez spoke to the families about the importance of honoring the nation’s history before fireworks lit up the night sky at 9 p.m. with a spectacular display of dazzle.