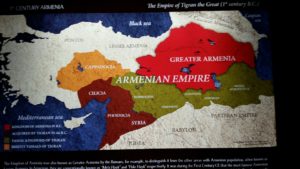 Making its international debut in America, the multi-dimensional and hauntingly moving exhibit “Armenia: An Open Wound” opened its doors to the public at The Brand Library Art Galleries in Glendale on Saturday, April 16, 2016. Curated by the Museo Memoria y Tolerancia [Museum of Memory and Tolerance] in Mexico City, this exhibit takes viewers on a detailed journey starting with the origin of Armenian civilization some 3,000 years ago through time revealing Armenia’s unique contributions to art, literature, religion and culture and the genocide that followed in the late 1800s and most notably in 1915, by the Ottoman Empire. The exhibit opened in Mexico City in 2015 and was brought to Glendale through a partnerships between The City of Glendale Library, Arts & Culture Department and the Armenian American Museum in Glendale.

“This exhibition is very different from other exhibits on Armenia,” states Tigranna Zakaryan, community outreach director for Glendale’s emerging Armenian American Museum. “It doesn’t just depict one aspect of Armenian culture or livelihood but shows a timeline through early Armenian civilization as the very first Christian civilization, history leading up to the 1915 Armenian Genocide, the international humanitarian efforts which followed, and the founding of  the Republic of Armenia. then through history right up to the Armenian genocide and the international relief efforts that followed. Visitors can view graphics, listen to audio, and experience a memorial in the deserts of Syria through the exhibit’s many different facets.”

The exhibit, which originally opened in 2015 in Mexico City, attracted an estimated  70,000 visitors.

Linda Atach Zaga, who serves as Museo Memoria Y Tolerancia’s temporary exhibitions director, describes the motivation behind the exhibit saying, “[The exhibition] seeks to raise awareness about the Armenian Genocide by inspiring reflection, respect for ethnic and cultural diversity, and upholding human dignity. The Armenian Cause is rooted in the universal theme of preserving memory as the first step in mobilizing toward global human rights and this exhibition is uniquely designed to encourage critical reasoning among diverse audiences as they relate the Armenian context to broader social justice themes.”

In creating this partnership with the Armenian American Museum, Brand Library Director Cindy Cleary says this exhibition supports the Library’s mission to offer its community a diversity of ideas that will inspire curiosity and enrich their daily lives.

In conjunction with this exhibit, the following complimentary events will be offered to the public at the Brand Library & Art Center:

Visit www.ArmenianAmericanMuseum.org or call the Brand Library at (818) 548-2051 for more details on these programs.

On Thursday, March 24, 2016, several of L.A.P.D.’s finest came to Sunland-Tujunga to address growing concerns about transient and drug crimes as well as drag racing and other issues. The event was sponsored by Sunland-Tujunga Neighborhood Council Safety Chairperson Nina Royal and was held at the Elks Club on Commerce Avenue. Guest speakers included: Commander Chamberlain, Homeless Coordinator for the City of L.A.: LAPD Lieutenant Solano, who oversees gangs and narcotics; LAPD Transportation Officer Flores and Captain Eskridge.

Commander Chamberlain opened the meeting by telling residents that a new law came into effect 2 or 3 years ago which prevents police from going through transient encampments and confiscating their belongings. However, there is now a proposed law before the Los Angeles City Council #56.11 which would allow police and sanitation to go through the possessions of homeless when they are left out in the open. Currently, a team known as the “Reset Team” goes to transient cleanup sites along with Department of Sanitation to identify bioenvironmental hazards that may exist in cleanup sites.

Commander Chamberlain mentioned that many homeless do not want short-term housing, that they are “service-resistant.” Due to a homeless advocate lawyer, who has created legal roadblocks for police, the homeless are well protected here in California. He pointed out that being homeless is not considered a crime. He added that it is in fact not humane to enable human beings to live in tents and he suggested that handouts of clothing to the homeless is actually creating a larger issue with trash accumulations.

Captain Eskridge spoke about the LAPD Transient Car that focuses specifically on transients committing crimes. In order to support police investigations, he suggested that businesses and residents install video cameras, so if a crime is committed, there is proof to prosecute them. He added that today’s technology is very inexpensive and can provide very good quality surveillance for properties.

Lieutenant Solano spoke about how his work involves reducing the number of violent crimes that go hand in hand with gangs and narcotics so he can rebuild the community’s trust. He gave a report on what is going on with the local gangs in the Sunland-Tujunga area and how crimes have been reduced. Out of 18 previous marijuana dispensaries in the Sunland-Tujunga Foothill area, only a few locations now operate.

LAPD Traffic Officer Flores of the Community Traffic Safety Unit then reviewed stats on the number of traffic incidents in the Valley last year: Out of 17,000 total, 1,600 were in Sunland-Tujunga and 5 involved fatalities. That number is now up to 13 fatalities for 2016.

Residents questioned how to deal with illegal street racing, a big issue for our community. Police are spread thin right now, but residents were told to report it to LAPD and they will respond as soon as possible. As with any police activity, it’s always best to report the incident to the police and let them investigate instead of trying to resolve it yourself.

Important phone numbers to call to report crimes: “911” – for emergencies only.

On April 20 and May 18, 2016, I will be sharing my 30-year career journey as a news journalist, corporate/business copywriter and publicist with high school students at two, underserved Los Angeles high schools: Oscar de la Hoya High School in South L.A. and Animo Inglewood High School. In doing so, I hope to impart to these idealistic young students that the next ten years (at least) of their lives are going to involve hard work and sacrifice. And while they will question the need for giving up their free time and putting in this level of effort, it will all pay off in the future because it will provide them with the dedication, determination and discipline they need to be successful at whatever they choose to do.

My two presentations are in partnership with the Youth Business Alliance (YBA), a 501(c)(3) nonprofit organization that focuses on bringing critical 21st century business skills and perspectives into the classroom. In an effort to provide high school students with a broader perspective of what it takes to be successful, The Youth Business Alliance invites business leaders to share their experience and achievements. The YBA was formed in 2012 with one disadvantaged school and has since grown to include 14 high schools serving roughly 350 disadvantaged students each year through its year-long after school course “Introduction to Business & Careers.” When I started my career as a news broadcaster and radio news reporter right out of college, I had stars in my eyes: That first month, I got to meet and interview Sweden’s King Carl XVI Gustaf and Queen Silvia who were in Newport, R.I. for the America’s Cup Races. I also got to interview American icon Ginger Rogers who was humble, gracious and patient with me.

But that first year was also a time of sacrifice. I had the midnight to six a.m. shift at radio station WOTB and in addition to having to be there six nights a week (Monday – Saturday), I also had to cover City Council/Town Council meetings in three towns before I went to work. Then just 21 years old, I often felt lost, lonely, and displaced from everyone I knew and had a hard time making connections in that affluent seaside resort community, so I threw myself into my work and that became the focus of my life.

Eventually I decided to get out of radio altogether. I moved to the West Coast in 1988 with the dream of writing for a number of entertainment publications. I managed to do that but found out that they didn’t pay enough to make a living, so I also began working as a writer for a number of public relations firm. In 1990, I started my own business as Writer For Hire® and also freelanced for the Los Angeles Business Journal, Variety, Boxoffice, Entertainment Weekly, Insurance Journal and a number of corporate outfits.

What I have found is that it is never easy to build your dreams – it always involves sacrifices and hard work, but overall, it pays off by giving us the opportunity to do the kind of work that we love. Today, I have clients who I value, who hire me because they need my expertise, they respect my work ethic and they pay me for my time.

Looking back, I’ve never worked so hard in my life as I did at the start of my career, but I believe all the challenges I have had gave me a wealth of experience in life and a tenacity to succeed, when other writers have had to close up shop or take other jobs. Now, I have the opportunity to help today’s youth get started on their own career path and it’s my time to give back.

Writer Pat Kramer specializes in developing informational, editorial, promotional and ghostwritten content for law firms, real estate and insurance companies, the travel and hospitality industry, and a wide variety of business professionals and potential authors. Her press releases have helped first-time authors reach “best seller” status on Amazon.com, and her media outreach campaigns have elevated formerly unknown business professionals to “thought leaders” in their industries. Known as Writer For Hire® since 1990, Pat has written more than 1,000 articles for local, national and well respected industry publications.

As a speaker, Pat Kramer has led workshops and seminars for business associations and organizations for the past 20 years, helping them to improve their branding messages by using news-oriented press releases, professionally-written articles, and informational blogs on social media. Pat is a recognized business leader and an active member of her business and civic community in Sunland-Tujunga. She is an advocate for the humane treatment of animals and the ghostwriter of several books and memoirs.

For more information on Writer For Hire®, please visit: www.writerpatkramer.com.

To learn more about Youth Business Alliance, go to: www.youthbizalliance.com.